Please welcome today's Friday Friend, Suzie Tullett, who first tels us something about herself:

I was born and raised in Lancashire and after leaving school I undertook a variety of jobs – from office work to teaching in Further Education, from managing a Training & Advice Centre to being an outreach worker for Women’s Aid. So, it’s fair to say my working life has given me the chance to get to know all kinds of people, from all kinds of backgrounds; a definite asset for anyone looking to write for a living.

Amidst all of this, I was also raising a family, whilst at the same time working towards a BA (Hons) in Women’s Studies. The latter being something that finally encouraged me to take my writing aspirations more seriously and as such, I then went on to obtain a MA in Television & Radio Scriptwriting. Fortunately, this led to my being chosen by the BBC for their New Writers’ Initiative – a break that culminated in the opportunity to work on their continuing drama series, Doctors.

Even so, this still didn’t stop me continuing to dabble in the world of prose and testing the waters with a bit of poetry and a few short stories, I was lucky enough to garner a modicum of success through publication, allowing me the confidence to put a future in scriptwriting to one side, in favour of a career as a full-time novelist. So, after successfully graduating from the London School of Journalism’s Novel Writing Course I now write contemporary women’s fiction and because in my view you can’t put a price on laughter, it tends to have a very humorous slant.

Are Reviews Really All That Important?

There’s been a lot of discussion around reviews of late, particular those left on on-line book stores. People seem to be wondering if the vast majority are, indeed, worth the paper (or in this instance, the screen) they’re written on? They ask if they’re genuine? Or just written by an author’s family and friends? And there’s even some suggestion that alleged readers have reviewed books without actually doing any reading – and all for a fee!

Naturally, this raises the question as to whether or not such reviews are actually all that important? However, in my experience as both an author and a reader, my response is that yes, I think they are.

Firstly, as an author I wouldn’t dream of paying someone for a good review and I very much doubt any of my peers would either. Not only is this bad form, it’s a sign that we might not have sufficient confidence to let our work speak for itself; which then beggars the question, if this is the case, why we’d be putting it out there for people to read in the first place?

Secondly, as professional writers we’re not doing what we do purely for family and friends; we’re pouring everything we have into our latest magnum opus for you, the book reading public. So as such, it’s your opinions we want to read about on these sites, not those of our loved ones. So like me, I don’t think the majority of authors would waste their time cooking the books, so to speak, as it doesn’t serve any purpose. Furthermore, we also know the importance of ‘word of mouth’ when it comes to recommending one book over another and these online review sites do operate as a virtual ‘word of mouth’ system. Of course, this  means any negative reviews also get their fair share of attention, but as with every other profession we have  to take the rough with the smooth.

Now let’s look at it from a reader’s point of view. As readers, do we really want to fork out our hard-earned cash on a book that sounds ok, but it’s written by an Author we’ve never come across before? Especially in these financially strapped times of ours? Of course, if we stick with the authors we know and love, we could simply be denying ourselves the opportunity to broaden our reading experiences; but still, we don’t want to waste our money, time and effort just to end up ploughing through something we’re not quite enjoying…

Then again and on a positive note, at least a physical book can enhance the look of a bookcase, so it’s not a complete waste of money. But do we really want a list of titles clogging up our e-readers because it turns out what we’ve just bought isn’t particularly our thing? No siree… no matter how cheap a download, we still want to enjoy what we read!

Of course, that’s when these on-line reviews sites come into their own. We get to see who thought what and why, good and bad; and like all of you, I know I’m intelligent enough to decipher what’s genuine and what’s not. And let’s face it, even a negative review can simply be a troll with an agenda…

Either way, having read what other readers have to say on a particular book, at least we get to make a more informed choice over our reading material. 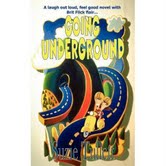 'Going Underground' is available on-line and in all good book stores, in both paperback and e-reader formats