I have an ‘inner vision’ of my characters as soon as I start a new story, and it’s occurred to me that all my heroines have had long dark brown hair (usually wavy) and either brown or hazel eyes (with one exception - Jess in ‘His Leading Lady’ who had blue eyes). I’ve never yet had a blonde or auburn heroine. However, my dark-haired heroines don't all look alike in my mind’s eye, as I can distinguish them very clearly.

My heroes have been more varied – two have had dark hair and deep brown eyes, one was dark-haired but with blue eyes, and two had light brown hair and blue eyes.
I can’t define why I choose these colourings. I don’t think I make a deliberate choice; instead, the characters seem to create themselves for me once I start writing about them.
Apart from describing their hair and eye colour, however, I don’t usually write much more about their faces. That’s mainly because I find it difficult to describe faces, unless they have some very distinctive feature. So I keep to very ‘standard’ descriptions. The heroes might have wide foreheads, well-defined jaws and maybe the trace of dimples. The heroines may have heart-shaped or oval faces, or ‘attractive bone structure’, whatever that is!
So, although I can see the characters in my mind, I think I tend to let the reader develop their own mental image of them, which may or may not be influenced by the cover picture, if the characters are shown on that.
I find it easier to describe their figures than their faces, but I admit I go for the stereotypical ‘romance book’ hero – tall, with broad shoulders and slim hips, and the heroine is usually slim, of course (as slim as I used to be in my 20s - a long time ago!)
While I was thinking about this topic, I started to wonder if I should actually be making more effort to describe my characters, beyond these basic details. However, as I'm writing the description of the hero from the heroine's POV (and vice versa), I wonder if the brief description is sufficient. After all, how many of us (in real life) actually describe someone's face, either to ourselves or to someone else? We don't (or at least I don't) analyse someone's facial features in any great detail.
All of this led me to wonder - how much description do you give of your characters' physical appearance?
And, just out of interest, how would you describe this guy? Someone posted this photo on Facebook recently and  I did actually challenge myself to describe him, but realised I was still using my usual phrases! 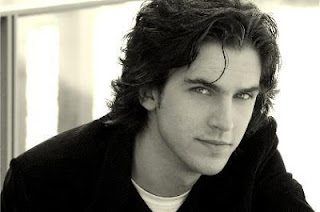