What I Read Other Than Romance


For a while I read romance. Exclusively. Probably beginning in high school, other than required reading for English literature classes, I didn't go far without a Harlequin American Romance in my hand. I eventually branched out into historicals and single titles, but for me, romance was queen.

In time I expanded my horizons further. A group of friends started a social book club, and we read a plethora of types of books: historical fiction, women's fiction, chick lit, best-sellers...but no real romance.

As I've gotten older, I still enjoy my romance, but my main fare these days is Young Adult Fiction. Ironic, isn't it? As a teenager I read adult romance and as an adult I'm reading fiction for teenagers.

The thing is, there's so much good writing out there for young adults these days. Perhaps not good in a 'classic' literature sense, but good as in a 'I can't put the book down' kind of way.

For me, it all started with Harry Potter. I was hooked on those books from the moment I picked the first one up. I've found that I have a taste for the paranormal in teen books. I fell totally in love with the Twilight series. (I think I've read them all seven or eight times by now.) I've always loved romantic vampire stories, so this was right up my alley. Recently I read the available books in the House of Night series. (Again, more vampires.) A friend just gave me the first in The Immortals series. (Not quite vampires, but close enough.) This summer I read all of the Alex Rider (He's a teen-aged James Bond) adventures. Another favorite series is The 39 Clues. 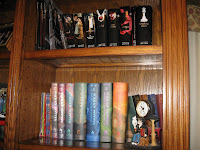 Even in adult books I like series more than stand alone. Perhaps it's once I've found something I like, I want more and more of it. I really like the Sookie Stackhouse books. (More vampires, plus HBOs True Blood is my guilty pleasure!) The Chocoholic Mysteries are a fun read. And I really enjoyed Lois Greiman's Chrissy McMullen books. When I need some hard core adventure, I turn to Dirk Pitt or Kurt Austin novels from Clive Cussler. 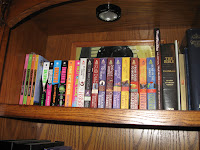 Most of these are "keepers" and go on the shelves of my personal library, to perhaps be read again and again.

My girlfriends and I share book suggestions, so I'm never without something waiting in the pile to be read. I've also discovered that it's hard to read other romance when I'm writing a romance myself. Things tend to get all tangled in my mind. Still, I have quite a large collection of romance in my library. 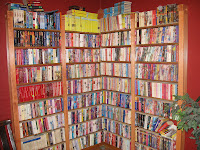 So, how about you? What's on your list these days besides romance?

My writing routine is NOT one to emulate. I write seasonally, specifically in the post-Christmas, pre-gardening season. Fortunately that's a fairly long stretch in Minnesota.

From May through December, I write to deadline. Heroines with Hearts posts, Voices of the Heart posts, weekly CSA newsletters, bi-monthly gardening columns. Short things, 500 to 1000 words. And critiques for my critique partner and loop partners.

This winter, when the garden is sleeping, I'll write two hours each weekday, either in the early morning or leisurely evening, and four to six hours on Saturday and Sunday.

I’ll start by telling you some types of hero which would never be among my favourites: vampires, werewolves, shapeshifters, aliens, ghosts, angels, demons, or other magically-empowered beings.  Okay, I know they’re very ‘fashionable’ right now but – confession time – I’ve never read any fantasy-type story.  Not even Lord of the Rings or any of the Harry Potter books.


I loved Hugh Jackman in ‘Australia’, in ‘Kate and Leopold’ and as Curly in Oklahoma.


But Wolverine?  No thanks!

Even as a child, I preferred stories about ‘real’ people, and not ‘fairy’ stories.  I have absolutely no interest in ‘fantasy’ in the strictest sense of the word.  Most of the paranormal beings are, to me anyway, the stuff of nightmares, not of romance.


I don’t like ‘bad boys’ either.  Never liked Heathcliffe, for example, or the ‘Byronic’ type of anti-hero. Maybe Mr Rochester in ‘Jane Eyre’ is also an anti-hero – keeps his wife locked up, pretends to be engaged to one of his lady friends to make Jane jealous, and then attempts to marry Jane bigamously?  What a jerk!  But we see him only through Jane’s eyes so can empathise (and sympathise) with her.

What about Mr Darcy then?  Supposedly women’s favourite fictional icon, whereas really he was a dominant patriarchal male.  Forget Colin Firth clambering from lake in wet shirt (on second thoughts, though, maybe I will keep that image in my mind!).  But Darcy was moody, overbearing, repressed and patronising.  In the 1940’s Laurence Olivier played a very ‘buttoned-up’ Mr Darcy and no-one swooned over him.  My guess is that those who drool over Darcy have never actually read the book, but are simply drooling over the devastatingly sexy Mr Firth!  And that gives me the chance to put up a picture of him, not the famous lake scene, but the smouldering look as he watched Elizabeth playing the piano – whoa, definitely a ‘stop the DVD, rewind and replay’ moment!


However, I digress. I’m supposed to be writing about my favourite hero, and not Colin Firth.  But – hold on a minute, maybe I can still talk about Mr Firth.  In ‘Bridget Jones’ Diary’ he plays the modern equivalent of Mr. Darcy (great casting there!).  He’s reserved and awkward but ‘nice’, while Hugh Grant plays Daniel Cleaver, the modern equivalent of George Wickham, a shallow but sexy charmer.


Which was my favourite hero?  Without getting into the whole alpha/beta discussion again, I have to say it’s the reserved but nice one, of course, who proves to have more far strength of character than the sexy charmer, and more sex appeal too!

RWA. EPIC. Publisher loops. Writer loops. There are a ton of them out there, especially if you add in groups on social media. I belong to several and have found them to have both benefits and detriments.
They are great ways to network. You meet people who are in similar circumstances as you and face similar situations. You also have the benefit of reaching people with more experience and who can offer advice. I’ve found great assistance offered on the various RWA loops—from advice about how to write, or how to submit manuscripts, to suggestions about what to bring to my first book signing. I even received 1000 “Signed by Author” stickers in the mail from an extremely generous loop member who just wanted to help me out!
Loops are terrific for promoting your work—they’re a built-in audience who understand the give and take desired by writers, kind of an “I’ll read your blog if you’ll read mine.” They usually have large numbers of members who have similar interests as you, as well as their own readers who may want to broaden their horizons by reading your work too.
They can also be great for encouragement. I can’t tell you how many messages of congratulations for a book release, upcoming signing, great review, etc. I’ve seen on the loops.
Facebook also has its own version of loops—groups of people with similar interests. The biggest difference with Facebook groups that I’ve seen is that you have more information about individual members of the group based on the accessibility of their profile. That, and some groups allow you to post excerpts from your work in addition to links for all group members to see.
While I’ve found loops and groups extremely helpful and beneficial, there are some downsides. One is that they are extremely time consuming. While they are great places to post a question, reading every single blog post, interesting article or review can take up huge amounts of time. They give me a tremendous amount of guilt, because since I post my blogs on the loops, I feel obligated to read others’ posts as well. And comment, if I can. But doing so takes hours, literally, and while I’d love to do that every day, there’s just not enough time.
They also generate a ton of email, especially if you receive individual emails of every post. Just seeing the number of emails I receive, or the number of posts that I haven’t yet read in a Facebook group makes me sweat and stresses me out (ridiculous, I know, but...).
Many groups have specific rules that must be followed in order to remain a member. The rules are meant to make things easier for everyone, although I’ll be first to admit that I sometimes find them intimidating. The stricter the rules, the less likely I am to post, although I still read everything that I find of interest to me at a given time.
As a rule, I tend to filter what I read based on the subject of the message. I skip over the topics that aren’t as pertinent to me at the time, and read at least the first in the string of any topic that is pertinent to me. If I’ve done a lot of promo posts, I’ll try to make sure to alert other bloggers that I’ve read their posts or commented on it so that I don’t seem one sided or only a member who’s in it for myself.  But it all depends on time.
While loops are great time savers when looking for information or promoting something—it’s one message sent out to hundreds of recipients—they’re also great time eaters, and it’s important to strike a balance between posting on loops and writing!
Posted by JENNIFER WILCK at 6:49 AM 20 comments: