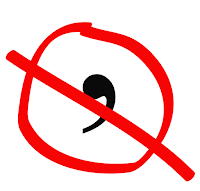 Recently, I’ve read a couple of books with dozens (if not hundreds!) of what I call ‘run-on sentences’, which are also referred to as ‘comma splices’. Basically, this is when two independent sentences are ‘connected’ with a comma.

For example: Paula loves Ireland, she has been there many times.

I hope that, like me, you are cringing, because all my instincts say this is incorrect – and this is confirmed by every grammar guide.

Independent sentences like this should not have a comma between them. They should have either a full stop (period), or a conjunction, or even a semi-colon. NOT a comma!

One source I checked suggested that comma splices were a common error made by ‘inexperienced writers’. However, the novels I read were not written by newbie writers who hadn’t had their work checked by an editor before self-publishing. Both had independent publishers – and therefore, one assumes, competent editors. But both novels contained not just single comma splices. Often they had three or more independent clauses with only commas between them e.g.
Charlie gazed in admiration at Jane, he was looking forward to dinner with her, they had not been out together for weeks, who knew when they would again.

I’ve adapted this rather than quoted it directly – but it’s an example of what occurs frequently in both novels. And, apart from the comma splices, shouldn’t the final ‘independent sentence’ have a question mark at the end anyway?

This leads me to wonder
(a) whether the authors are totally ignorant of basic grammar rules.
(b) whether these novels have actually received any editing (despite one of them being with a fairly high profile publisher)
(c) perhaps more worrying in my opinion, whether today’s editors are ignoring a fundamental grammar error.

What do you think?

P.S. I’m happy to report that most novels I have read recently do not contain this error!
Posted by Paula Martin at 11:32 AM 13 comments:

Jennifer is self-publishing one of her backlist books...

When my previous publisher, Rebel Ink Press, let me know they were closing their doors in June, I wasn't surprised. However, I was conflicted about what to do with the four books on my backlist that I had with them. So after taking a breath, I decided to try self-publishing one of my titles.

I've heard a lot about self-publishing but didn't quite know how it worked. So before I did anything, I talked to people who did it, and did it well. And what I learned is that while you have to pay money for editing, covers, etc., the percentage of royalties you make is significantly higher than the percentage you make with a traditional publisher. That's not to say I don't want to publish with a publisher. I do. I'm very happy with my current publisher. But some of the backlist books whose rights I now have back are not going to go anywhere and I don't want them to languish in the ether.

I’m starting small, only working with one of those books—A Heart of Little Faith. The first thing I did was to give it to an editor. No matter how many times it’s been looked at, it can always benefit from someone other than me looking at it. A writer friend I know is also a freelance editor. She edited the entire manuscript and oh boy, there were a lot of changes she recommended. I took a deep breath and made them, and wow, the book is SO much better.

Then I sent the manuscript to a copy editor. Because again, I always miss the little things and those are the things that end up embarrassing me (Random Reader: Did you know you spelled that word wrong?). I know someone who is phenomenal at copyediting and she found lots of things that would have been embarrassing if they had been published.

Whenever a book is re-published, it needs a new cover. So I hired a cover artist, who designed a beautiful cover.

One of my critique partners does all her own formatting and works with Amazon, so she handled formatting and gave me explicit and easy instructions on how to put it up on the site. It's there now and available for pre-order. It will be released officially on June 1. Since this is an experiment for me, I'm only publishing this book for Kindle. I'm curious to see what happens. I know how much I spent and I’ll see how much I make in sales. If it works, I’ll self publish the others. If not, I’ll hold onto the rights for a while and see what, if any, other options I have.

Wish me luck!
Posted by JENNIFER WILCK at 6:53 AM 8 comments:

My mission, should I choose to accept it

Ana muses about a writing challenge.

Last week, the plot of my next chapter requires the hero to battered, put aboard a steam freighter, and expected to die of his injuries. Naturally, being the hero, he lives, but wakes with amnesia. My original draft of this chapter was in a secondary character's POV. Reasonably well-written with dialogue reveals of the hero's situation and condition.

First feedback from a round one crit partner was thumb's down. "Too telling. Try from his POV."

Hmmm. How to write a scene from an unconscious character's POV? Guess he can't be unconscious.
Here's what I have now. What do you think?


The man awoke to drumbeat throbs in his head. He tried to fill his lungs.
Pain stabbed his ribs.
With an effort that almost left him spent, he forced one eye to open a crack. The other stayed shut.
Somewhere behind him, a hissing lantern cast a faint light.
He lay prone on a floor, hands crossed on his chest like a corpse. Stacks of burlap sacks towered above him. He swiped his parched tongue over his lips and loosened a chunk of crusted blood. A gash oozed, refreshing the sickening taste of metal coating his mouth.
Feet shuffled past his head, followed by a heavy thump.
He tried to cry for help, but all that came out was a barely-audible groan.
“Think he’s stopped breathing?” a man whispered.
“I hope so,” a second replied. “I’ll check.”
Did they mean him? His heart raced with desperation. He’d heard of people who appeared dead and were buried alive.
A floorboard creaked. Grunts sounded near his ears. Something thin and sharp-edged touched his lower lip. A piece of glass or broken mirror.
Summoning his last ounce of strength, he exhaled and prayed his breath would fog the glass.
“Sonofabitch,” the second man exclaimed. “He’s still alive. He must have medicine man blood in his veins.”
“You still wanna dump him overboard?” the first man asked.
“Can’t until he’s dead. Damn. How am I going to explain this to the captain?”