B is for Barbara Davies 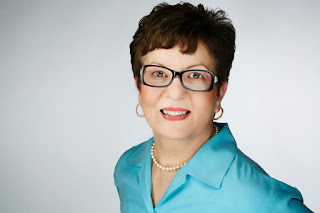 In Between Land and Sea (released in September 2013), I introduced Barbara Davies aka Isabella of the Mediterranean Kingdom. She will be returning in The Coming of Arabella (to be released August 19, 2015).

Before writing my novels, I like to interview the characters. Here’s what Barbara had to say...

Tell us about yourself.
For the first twenty-three years of my life, I was Isabella of the Mediterranean kingdom, granddaughter of Chief Elder Annabella. Each year, since turning eighteen, I was crowned Most Beautiful Mermaid—a tribute to my auburn tresses, mesmerizing green eyes, and magnificent tail. All that changed when I swam ashore one evening and met Andrew Bradley III. I fell madly in lust—I now know that wasn’t love—and gave up my tail for him. In a fit of rage, Annabella chopped off my hair, aged me thirty years, and gave me twenty extra pounds to carry. Andrew was horrified and abandoned me on the fog-drenched shores of southwest England, leaving with only a suitcase and a magic tablet.

What is your role?
I am the protagonist of Between Land and Sea and The Coming of Arabella, Books 1 and 2 of the Mediterranean trilogy. 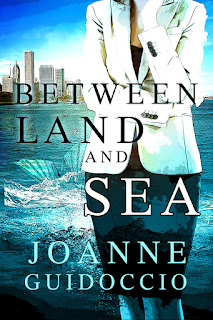 In Between Land and Sea, the storyline revolves around my struggles to reinvent my human persona of Barbara Davies, a fifty-three-year-old woman who lived in her husband’s shadow. Thankfully, I have the magic tablet with online mermaid support. I don’t think I could have managed with the unimpressive résumé I was given—a Philosophy degree and a handful of volunteer positions and low-level jobs. 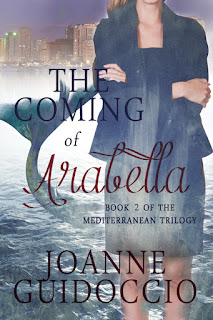 In The Coming of Arabella, I’m on the cusp of having everything I want in this human life. But fate intervenes in the form of Arabella, my perfect Bella sister, who is determined to wreak havoc in my career and relationships. She forces me to leave my well-constructed life and reinvent myself once more, this time in the desert paradise of Sedona.

Tell us about the four men in your life.
You too! It’s bad enough that all the mermaids and mermen in the Mediterranean Kingdom are continuously talking about my love life. But I guess it does bear some mention.

For one disastrous week, I thought that Andrew Bradley III would give me a fairy tale life. But all that changed when he saw me in my transformed state. I have forgiven him, but I will never forget the look of horror in his eyes.

I literally fell into Graham Scott’s life. As I was leaving the Carden Public Library, I tripped on a few stairs and Graham rushed to help me. Afterward, he invited me out for coffee, and our friendship blossomed.

When I visited my dear friend and ex-mermaid Gillian Sanderson at her condo in Chicago, she introduced me to Stewart Tobin. The attraction was instantaneous, and I found myself unable to speak. Stewart wooed me relentlessly. He even gave me a black BMW.

I fell in love (or lust, I’m still not sure) with David Ferguson when I heard him preach at Desertview Church in Arizona. That’s my latest relationship and...

It’s evolving in The Coming of Arabella.

Enter to win a $10 Starbucks gift card.
Click HERE for the Rafflecopter link.

Thanks so much for joining us today at Heroines with Hearts, Joanne! We're so glad you decided to participate in our A - Z theme. It was certainly intriguing learning about Barbara.
Posted by Debra St. John at 1:07 AM

Email ThisBlogThis!Share to TwitterShare to FacebookShare to Pinterest
Labels: guest blogger, Joanne Guidoccio. Between Land and Sea, The Coming of Arabella