Ana's Getting 'Tis the Season

Ana is thrilled to share the cover for 'Tis the Season, a joint project between five authors. 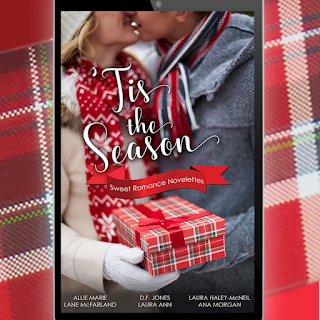 “Tis the Season of the heart. Baking cookies, trimming the tree and falling in love with sprinkles of Christmas magic in a collection of sweet romance novelettes.
Sometimes, all you want for Christmas is right before your eyes.”

Chapter 1
Neely Martin rushed up the Boughboro Hospital stairwell and yanked open the heavy third-floor door. The scent of disinfectant, beeps of monitoring machines, and confident stride of nurses with identification badges reassured her that her father was receiving excellent care.
She found his room and opened the door without knocking. “I’m so sorry, Dad. The plane from D.C. was late and—”
Her father sat in a wheelchair wearing his old leather bomber jacket. A rigid plaster cast encased his leg from the top of his thigh to the ball of his foot. His face looked ashen, the lines on his forehead pronounced.
She gave him a careful hug, and then leveled a scowl at the petite nurse holding the handles of the wheeled chair. “My father had surgery less than twenty-four hours ago. Why isn’t he in bed?”
“Mr. Martin talked with his doctor, and Dr. Franklin agreed to discharge him,” the nurse explained. “His first check-up is in two weeks. We just finished going over his medications.”
“Going over? With whom?”
“With me.” Justin Harrington stepped clear of a partition curtain.
Neely’s heart stuttered. Justin looked tan and fit, as if he’d stuck to their after-we-graduate promise to balance work and personal time.
She searched his handsome face for a sign he’d finally forgiven her for accepting the job in D.C., but his steel-blue eyes held no warmth. She swallowed the lump that formed in her throat. “I wish you would have waited for me.”
“We weren’t sure when you’d be able to tear yourself away from Congressman McHenry.” Justin’s voice was cold and condemning.
An awkward silence filled the small room.
Dad patted her arm. “Justin offered to stay until you arrived, honey.”
Remembering how things used to be, she shook off Justin’s jab. When her mother left without saying goodbye he’d sat with her on the edge of the playground while their first-grade classmates played. Fifteen months later, he’d stood beside her in the cemetery as her mother’s casket was lowered into the ground.
He’d taken her to the prom and waited to mail his application to the University of Vermont until she’d rewritten her application essay. They’d both studied Public Administration with a desire to serve the public.
So why couldn’t he understand that being an aide to Congressman Daniel McHenry gave her the means to solve big problems?
“Miss Martin”—the nurse interrupted her thoughts—“The doctor’s orders are pretty straightforward. Elevate the leg. Take the meds. Keep all check-up appointments.”
The nurse crouched until she was eye-to-eye with her father. “After the cast comes off, you’ll need several weeks of therapy. Then you can ease back into work.”
Her father nodded. “Understood.”
“We decided the back seat of my four-by-four would be the best way to take him home,” Justin said.
Neely felt a ping of embarrassment. The car she’d rented at the Burlington airport was small and fuel-efficient. Good for the environment, but wholly inadequate to haul a big man with titanium screws in his fractured femur.
“I’ll meet you at the entrance.” Justin picked up two aluminum crutches and a drawstring hospital bag and carried them out of the room.
“Anything more to carry?” Neely scanned her father’s hospital bed.
“I don’t think so.” Her father craned his neck and looked up at the nurse. “I’m ready to go.”

Neely stood beside the nurse in the elevator, noting her father’s hunched shoulders and clenched jaw. He was in pain—and determined to go home.
The elevator door slid open.
They passed by the emergency waiting room and approached the automatic exit doors.
Outside on the curb, Justin stood beside a metallic-blue pickup. Its spotless finish and chrome trim gleamed under the early December sun.
He’d gotten the city manager job he wanted—and now a truck. Probably saved up and bought it outright.
The nurse wheeled her father outside and positioned the chair next to the open crew cab door.
Her father immediately pushed out of the chair and tried to stand.
“Dad!” Neely grabbed his arm.
His good leg buckled. He started to topple over.
Justin darted forward and caught him.
“Back him up to the seat,” the nurse ordered. “Don’t hit his head on the roof.”
Her father scooted across the seat butt first until the full length of his cast was safely inside the truck. Justin leaned in, stretched out a seat belt, and buckled him in.
“You’ll have to slow down, Mr. Martin,” the nurse chided. “Wait for others to help you.”
Her father closed his eyes and nodded, his face ominously pale.
“Take him straight home and put him in bed.” The nurse turned to Neely and lowered her voice. “He needs home care assistance for at least a week. Maybe longer.”
Neely gulped. Her father had never been able to afford top-of-the-line health insurance, and she didn’t have much in savings. Rent, metro transit, and student loan payments ate up most of her congressional aide salary.
Justin shut the crew cab door. “John’s ready to go.”
Grateful for an excuse to dash off, Neely thanked the nurse, fished the rental car key from her blazer pocket, and scurried across the parking lot. She and her father would manage on their own, just like they’d done for years.

***
Every muscle in Neely’s body ached by the time she and Justin tiptoed out of her father’s bedroom.
Dad had been so unsteady on his crutches, he’d tossed them aside on the front steps and stretched his arms across her and Justin’s shoulders. They’d supported his weight while he hopped on one foot up.
Justin stopped in the hallway and gazed at the picture taken at their high school prom. His gold cummerbund and tie of his rented tuxedo matched the bodice of the evening dress still hanging in her clothes closet. His forehead glistened with sweat. “Remind me never to own an old house with steep stairs.”
“I’m down for one level with no walls,” she bantered. “A big open space with all the furniture on wheels so you can roll into the kitchen at midnight for a glass of warm milk.”
She held her breath. They’d often joked not so long ago. Would he play along now?
“I best be going,” He walked downstairs and lifted his jacket off the coat rack. “John’s prescriptions should be ready. He authorized me to pick them up. I’ll swing by, so you don’t have to leave him.”
“You’ll need money for the co-pay.” She ran down the stairs.
“Already have it.” He chewed on his lower lip, an all-too-familiar sign he had more he wanted to say but was holding back.
She waited for him to disparage her work with Congressman McHenry. She could take it. Working in D.C had taught her to shoulder criticism.
Without another word, he walked out.
Disappointed, she stood beside her father’s recliner in the living room and watched out the picture window as Justin strode down the front walk, got into his truck, and drove away. She heaved a sigh and felt something in her hand. Looking down, she realized she’d wadded the crocheted doily her father kept on his recliner’s headrest.
She smoothed her mother’s handiwork back in place. She’d never forgive her mother for walking out, but she didn’t hate her anymore.
Hopefully time would heal the rift between her and Justin.