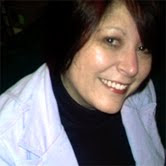 Please welcome Deborah Riley-Magnus!
She will give a free ebook copy of "Cold in California" to one lucky commenter today.

Vampires, Romance and a Real Chance at Heaven!

I don’t know about you, but the whole Vampire thing doesn’t sit well with me. Yes, they’re incredibly sexy beings everyone would secretly (or not so secretly) love to take a bite out of, but seriously, think about it. The entire concept is laced with hopelessness and despair. To live dead, cold and only in the dark, to murder in order to remain functioning, and to never, ever have the slightest hope of redemption? It breaks my heart. In fact, it bothered me so much … I changed it!

There’s so much romance mixed in the vampire lore and mythology, but I wanted to create a romance with not only the perfect woman for my reluctant vampire hero, but a romance with the possibility of true salvation. Here’s basically how it went for Gabriel Strickland:

What happens to a vampire after he finally dies? Heaven? Hell? Nope, purgatory in a West Hollywood warehouse. Go figure.

Where does any original idea come from? I’m a firm believer that creativity is plagiarism with a flare; the wheel can’t be reinvented and if it’s square, it can’t roll. Basically, all story ideas come from the same original four or five plots, but I strongly believe that how a story is told makes a bigger impact than what the story is about. Most ideas start with love or adventure, coming of age or fantasy; the great ones come from a skewed point of view no one ever thought of before … Cold in California came to me from a very twisted and off-center place.

Truth? I never intended to write a vampire story but one day, while out on sales calls in West Hollywood, I had one of those experiences only a writer can have. It was an epiphany of the creative senses. As I climbed into my car to drive to my next appointment, I noticed something very interesting across the street. A dwarf walked along then stopped in front of what appeared to be an empty old warehouse. He suspiciously looked left then right then skulked into the darkness and my mind went off into the warped unknown. What was inside that warehouse? Was that guy a leprechaun or maybe a troll? Were there other supernatural creatures in there? What were they doing in that warehouse right in the middle of bustling West Hollywood? And … and … what if they were hiding? What if they were all … dead? The vampires would be double-dead, or better yet, twice-baked! What if they have to live right in that warehouse and … what if they have to behave themselves in order to gain salvation or else?

And thus began the story.

"Cold in California" is an urban fantasy that takes a really, really dead vampire and mystically sweeps him to a West Hollywood warehouse where he has one last chance to earn redemption. Obviously this isn’t going to be easy, especially since he has to live with other chosen dead supernaturals – trolls, werewolves, pixies, leprechauns, fairies, and a few you may have never heard of. Against their natures, all these strange characters are challenged to earn the brownie points required to pass through the pearly gates. Gabriel, of course has far more difficulties, after all he’s very handsome, has to now live among humans and dead supernaturals and the other ‘living’ supernaturals infesting the planet. He has to deal with the fact that everything he believed about final death is a lie, tolerate the unique West Hollywood warehouse culture, and endure intense new and exciting love with a beautiful woman (of course). Oh, and he must ignore his “loner” personality to step up and triumph over imminent disaster. And all this poor unhappy vampire wanted to do was be dead.
My goal was to create a vampire story and romance you’ve never seen before! How much fun is that?

"Cold in California! is the first of a five book Twice-Baked Vampire Series and was released June 15, 2011.

Gabriel wondered if he’d stumbled across his first ‘familiar’ human since 1931. No one had ever suspected he was vampire before. No one. Ever. Had she known his kind? Perhaps fed them? This could be easy, it should be pleasant and it might solve a multitude of problems. Gabriel was tired of moving around so much. Something a bit steadier might be just what the doctor ordered. Any relationship required a boatload of lies and apologies for his seemingly accidental, over-zealous biting. Cursed by the life he lived, hit and run was the norm for his sexual encounters. Keeping his secret demanded he leave sooner than he liked, before things got out of hand like they did in Omaha.

There’s a boredom that comes with complete variety whether one believes it or not. Living forever had its drawbacks. The mere idea of seeing the same face and tasting the same blood day after day for a while nearly charged his batteries to overload. It also raised his radar.

She may be the answer to an undead’s prayer, but she could very well be the opposite.
He’d never crossed paths with Buffy the Vampire Slayer but that didn’t mean she didn’t exist. Still, he felt an imaginary warmth under his skin and relaxed into the possibilities. Gabriel tried to be an optimistic kind of guy. He knew that if things went bad, his host went to heaven. That was a positive outlook, now wasn’t it?

Through the boring innings they chatted casually about the weather and various cities they’d seen. If, or in that case, when Chicago lost, the team would end the year in dead last but hope reigns eternal. It was the only reason the crowd was so big. At the bottom of the ninth, Brent Tittler struggling at the plate, and right in the middle of describing her best friend’s cowboy-themed wedding, Starling made a statement that would have caught Gabriel’s breath, if he breathed.

“I always wondered about the wounds. Do they heal?”

His eyes were cold and hard, he didn’t dare show his intrigue. She didn’t even flinch.

“I mean, do you leave a bad mark, and does it have to be where people can see it … when you … you know … drink? Will I need to take out stock in antiseptic?”

“Oh yes, especially with a great looking guy like you. You are a man, right? In every sense of the word?”

Gabriel glanced around. Behind them sat a row of nuns, all dressed in medieval black and white habits and clicking rosary beads in their gnarled fingers. Chicago Cubs caps were precariously propped, tilted on their heads over ominous black veils. No doubt they were serious, biblical Cubs fans. Like God, if there even was a God, really gave a damn where the Cubs ended the season. Gabriel could hear their whispered Hail Marys and wasn’t sure if he was more uneasy talking about sex or his unholy nature in their presence. He drew close and spoke quietly in Starling’s ear. “Are you asking if I can perform intercourse with a woman? Yes I can. Antiseptic optional.”

She giggled a nervous laugh. “So, no infection?’

“Not that I’ve ever caused.”

“Maybe we can go now?” she suggested in a husky low voice, leaning closer even though he could have heard her whispered indecent proposal from across Wrigley Field. “This will be so cool!”

By the look of her, he could only assume she’d voraciously read Anne Rice. He just as voraciously hoped he could meet her expectations. A shiver rippled over his body like a minor earth tremor. Gabriel stood, smiled and reached to grip her hand. This was more than promising and he actually felt giddy for the first time in decades.

They had great seats, third row, just past the dugout on the first base side. Sweet seats, even with the Cubbies losing. Her warm hand gripped his as the crack of the bat resounded and he turned. It was a high pop up, but unlike all the other fans around him, Gabriel wasn’t watching the ball, illusively hidden in the lights. He was watching the sharp shard of a broken wooden bat soar … at breakneck speed … right … at … his … chest …

Well, this sure as hell wasn’t supposed to happen. Staked in the heart by a fucking broken bat? Who does that happen to? His hand shot to the wood, it was buried deep and he was weakening by the second. Agonizing sensations of explosion and implosion flooded through his body, noise blasted in his ears and suddenly he was staring up at the lights. Behind them, black night. There were stars but he couldn’t see them. The pain was excruciating and Gabriel begged any god who’d listen to make it end quickly. Heat. Searing. A stench. Then came the blackness and peace he had dreamed of for nearly eighty years. Finally, an end to it all. Dead as he was meant to be.

"Monkey Jump", the second book in the Twice-Baked Vampire Series is scheduled for release in late April, 2012. Gabriel Strickland may appear to be coping well with the responsibilities his life after double-death has dealt him, but it’s only show. The struggle to earn his ticket through the Pearly Gates takes a toll when he’s assigned to perform a Monkey Jump – a program designed to teach newly assigned management the skills required to do their job. To soften the blow, he takes his love, Dori, along as his assistant. What he wants is peace, a little romance and serenity to think things through, what he gets is startling temptation, a Soul Eater and his sidekick, Master Witch and Grand Matron, Neave Brittania Cook. One has a revenge agenda and the other, designs on Gabriel’s soul. It all gets worse when the Monkey Jump itinerary takes a perilous detour to a north Alaskan community of the oldest, most evolved vampires on the planet. Secrets must be kept and Gabriel must protect Dori as well as his own path to paradise. Well hell, this can’t be good.
Cold in California Amazon Link
http://www.amazon.com/Cold-California-Twice-Baked-Vampire-ebook/dp/B0055EC7E8/

Author Bio
Deborah Riley-Magnus is an author and an Author Success Coach. She has a twenty-seven year professional background in marketing, advertising and public relations as a writer for print, television and radio. She writes both fiction and non-fiction and as an Author Success Coach, focuses exclusively on publicity, marketing and promotional solutions for authors.

Deborah produces frequent pieces for various websites including Unruly Guides and WriteSEX as a marketing expert. She also writes an author industry blog and teaches online and live workshops as The Author Success Coach. She belongs to several writing and professional organizations. In 2011, she had a novel, Cold in California, and a non-fiction, Finding Author Success released. Her second fiction is scheduled for release in late April.

She’s lived on both the east and west coast of the United States and has traveled the country widely.